Reba McIntire’s “The Greatest Man I Never Knew” has been running through my head since I got the news yesterday afternoon.   Our hearts broke when we learned that the biggest, gentleman-dog of our doggy bloggy world crossed the bridge. 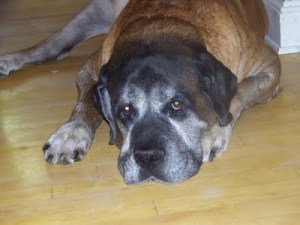 We never got to meet Thor, but we met some of his people last year, and we loved him as though he really was the dog next door.  Please pop over and wish his grieving family well.

We’ll miss you, Thor, so much so that we’re going to call Thursdays Thorsday indefinitely.

In happier news, there’s a still a spot in OBX waiting for us.  My relations confirmed yesterday that the damage is minimal, so much so they’re staying there and regret leaving their own dogs at home.  Our hearts go out to those not so fortunate, up and down the east coast.

At home, Gretchen was NOT amused that Dadaw bought a new back door on her birthday, but that too is a story for another day…