I’m all about making up words – SNOL, furgirls, PANK… but evidently, there’s already a word for “kinda’ vegetarian when it suits me.”

Flexitarian – According to About.com,  “Flexitarian” is a term recently coined to describe those who eat a mostly vegetarian diet, but occasionally eat meat. Many people who call themselves “flexitarian” or “semi-vegetarian” have given up red meat for health reasons while others, for environmental reasons, only eat free-range or organic animals and animal products.

Now… this girl isn’t giving up squat, but I was a pescatarian (didn’t eat land animal flesh) for a while many years ago, until I sincerely dreamed about a nice, rare filet mignon night after night and finally realized that I just couldn’t do it.  And I have followed a pescatarian when convenient diet ever since… right up until Marjie shattered my world with the announcement that shrimp is high in cholesterol. 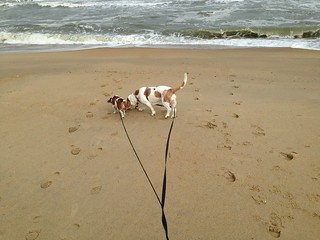 Pescatarians on the hunt – not by choice… as long as you don’t count the prescription rabbit kibble era.

You have to understand…  I am the product of farmers.  My mother’s people, on both sides, farm and have farmed since the beginning of time, as near as I can tell.  My father’s grandfather was a gentleman farmer back when it wasn’t cool and trendy to play in compost on your days off, and while I lack that gene for spending hours on the tractor or nurturing little seeds into edible goodness, I got a double-dose of the pass me some fresh produce, straight from the chicken coop eggs, and by all means, I’m okay with looking my protein sources in the eyes.  (My apologies to those who aren’t…  Good for you.  My once-removed cousin with the chicken houses DID assure that I am incapable of enjoying chicken without worrying about growth hormones and free range, etc.)

Of course, I credit my farmer-relations with my ability to enjoy tofu too.  My uncle by choice (or by marriage… but as he put it years ago, marrying my mother’s sister made us kin, but we’d choose to claim each other even without that legal union) was farming soybeans long before I’d found Tofutti in my grocer’s freezer.

But don’t look for me to begin haughtily announcing I’m a flexitarian;  I still have enough trouble explaining that Episcopalian isn’t a medical condition.   No, I think that as much as I love silly words, I’ll stick with just dodging red meat most of the time, because I was also raised to feel it’s rude not to eat what’s put in front of me, or to ask non-life threatening questions about my food.  (I’m allergic to scallops, so there is a time and a place for said inquiries, and I can issue a “NO – LEAVE IT!” with such authority that even a food-driven basset draws back.)

I shared the mango-edamame salsa recipe a few posts back, but now, I’m in search of a … four-bean? salad?  Garbanzo, red, black and green, with some red onion, cilantro and …  I ate it all, so I have only my fond food memories to help me.  It seemed pretty similar to the traditional three-bean salad, but … better.  If anyone can help a gal trying to flex more and meat less, it would be awesome!

And in other almost healthy food news, did you know that gluten-free (homemade) chocolate chip cookies are basically ALWAYS chewy, not crispy?  My friend used Alton Brown’s Chewy Gluten Free recipe, and since dogs can’t have chocolate anyway, there’s no need to substitute around the corn starch for Sissy.  They aren’t close to low cholesterol, but as long as I don’t eat shrimp with them, I’m going to say it’s fine.

Don’t hate me, but with no other changes to my routine (well, add in extra stress, but evidently, only Sissy’s eye problems and my mother’s death are stressful enough to stop the eating), I’ve dropped nearly three pounds in two weeks.  I’m pretty sure I’d heard somewhere before that high fat diets aren’t healthy…  hem.

13 comments on “There’s a word for that”