Thanks for your kind words.  I’m especially thankful for my local friends who have been wonderful about “leaning in.”  Unlike Ms. Sandberg, I believe we should lean into EACH OTHER, rather than career opportunities, but I share her notion that when we lean in, we’re all stronger and society – and each of us as individuals – is better for it.

Courtesy of Will Kerner; JLC future, present and past presidents

I’ve said it before, and I’ll say it again; I have the best friends this world can offer.  I’m particularly fortunate to have been president between two of the most loyal, dependable, supportive, collaborative women I’ve ever known.   They’re class acts, and I couldn’t have done this without them – not the past week, not the past two, three years.   If I’ve had any success as president, it’s been because the woman on the right and those before her set me up for success, and I sincerely hope we’ve done just that for the beauty on the left as well.

It’s odd to realize I’m at the end of my tenure as president, but it’s exciting too.  The new leaders are dynamic, energetic, and I look forward to working with them and seeing where the JLC goes in the next year.  I am certain it will be stronger, better and more efficient!

It’s also probably a good thing that I don’t have time to be wistful and wax poetic but so much.  Work is busy, and life is going on, whether it seems appropriate or not.  As Reba put it, “I guess the world didn’t stop for my broken heart.”  For nearly as long as there has been life on this earth, there has been death, and “carrying on” is what I do.  Maybe there is an element of denial in there too, but I don’t think so.  I am just wired to process things differently so that I can be the helper and fixer that I am by nature.

Not one to believe in coincidences, it still somehow took me a few days to realize my friend died on the 13th.  She was so superstitious that she all but stayed in bed and didn’t open the blinds on Fridays when they collided with the 13th, so is it ironic, destiny, or a self-fulfilling prophecy that Death came for her on the 13th? 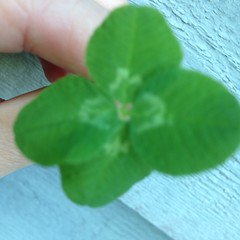 I found this bit of luck near the back door.  I’m not sure how  I suddenly became quite the four-leaf clover spotter, but this is the third I’ve found this month without even trying.   Isn’t the lighter green in the center interesting?

There are a few songs running ear-worming their way around my head:

I might have fallen down the Kate Spade rabbit hole.  I’ve always like her designs, and I’ve been intentionally avoiding the store that finally found podunk in the past year or so, but I accidentally – no,  seriously!! – wandered in today.  To my surprise, I left her Keds there (this time), but I couldn’t resist a belt (not shown online yet), and I’m supremely grateful that I managed not to even touch the PANK frock that kept calling out to me.  (Not linking to the image online because it looked SO MUCH BETTER in person – trust me.)  Unlike the other boutique designer I like, Ms. Spade favors a silhouette that makes the most of a woman’s curves.  I don’t need any more party dresses, not now, not ever…  but I do love her parfum too.  Beauty was my favorite, and it’s been discontinued.

I’ll be missing in action for a few days.  Life isn’t getting the best of me, but I’m not going to have time to post, and don’t have time to compose more posts and set them to publish later.

What’s happening in your world?