We have twin fawns in the woods.  I don’t know where Mom and Twin were, but one fawn was feeling rather brazen yesterday evening, as the dogs and I were getting ready to head out for our walk.

(Pardon the debris in the background.  It’s been a wet, sticks on the ground kind of summer.)

The deer are rather tame.  Sissy’s screaming – er, incessant barking – doesn’t faze them.   This one posed for me for probably close to a minute before retreating to the safety of the woods.

They won’t have spots much longer, but I do love their spots.  Even though we see these deer daily, we – the humans – don’t tire of admiring them.

On the other hand, Sissy yells her fool head off every time she sees them.  They aren’t welcome in her yard, she says.  I’m not sure why… they don’t really hurt anything, but they make her crazy.  Gretchen takes spells, but sometimes if there are no squirrels to bark at, she’ll bark at the deer too.

Of course, I do like spots and dots in fashion too, but that’s another story.

What are you delighting in today?

One of the beauties of virtual – online – shopping is I find it harder to make impulse purchases.  By the time I have to click to order, click to check out, confirm or add my address, payment, etc., I lose interest sometimes.  I thought I’d share some of the things I’m having trouble resisting today.

The Road Dogs have a great feature they call artsy fartsy friday, and while I’ve yet to purchase anything, I nearly do just about every single week.  Today’s post sent me to ArtsyDog and seriously?!  This pillow NEEDS to be on my sofa.  Seriously.  I’ve added coral/orange as our accent color in our brown/tan/denim living room…

Y’all saw my dress lust earlier this week, but I really can’t let this Lilly P frock go.  Can’t I wear it three seasons, spring through early fall, huh, huh?  Now, as is, and in the spring and fall with cardies, shawls, etc.?  (If you can’t see, there’s a cute little ruffle on the front too.  The link above will take you to a nice, big picture you can zoom in on and everything.) 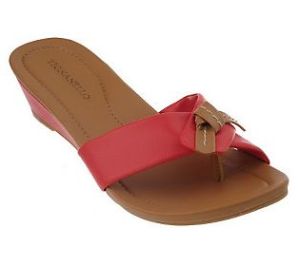 And these shoes…  I don’t really like “slides” but these actually are thongs.  Yeah, I have a coral problem this season… what of it?!  (Anyone own Tignanello shoes?  See, I’m sometimes a 6.5, sometimes a 7, and I never know with a new to me brand…)

Last, but HARDLY least is Penn.

Mugsy and HIS ball

No, seriously… that’s NOT a photo of Mugsy.  It’s a darling little about one year old Jack Russell boy who needs a home ASAP.  He’s deaf, can’t be in a home with young children, and a few of you already know he’s been tugging at my heart since I learned of him.   He is TRULY a special needs dog, but if YOU need him, just click over and make it happen.  (And let me know so I can be jealous and relieved.)  I feel he should be with us, but so far, the Knight won’t do more than glance at the photo.  (I try to converse about him daily.  I have Penn’s page open on whatever computer I’m on, at home or work…)

I want to go to Christiansburg this weekend, but I’m not about to bring home another dog without the Knight’s blessing.  What’s on your agenda?

This is the first whole work week I’ve put in since…  the second FULL week of December?  I’m ready for Dogs on Thursday, but in the meantime, I’m still so far behind I’m trying to decide what to skip and what to share.  And things won’t slow down until after February 20th, and then, that’ll just be to the dull roar we consider the norm in the Woods.

There are three things I think we’ll gab about today.  Vera’s new colors, area rugs, and boots, not necessarily in that order.

Yes, last week was so crazy that I only told TWO of you when I got my Vera preview email.  I think they’re all awesome!

First up is Boysenberry.  I’m curious to hear from the purple lovers.  This isn’t a true purple, and as has been the case of late with MANY of their new colors, I like the interior/contrast better than the main color.  But being a teen of the ’80s, does anyone else remember Paisley Park?

While it’s a happy print, I don’t predict it will come to my house.  It’s not purple enough for Sis – who has her own Vera now, but that’s tomorrow’s post – and it definitely isn’t PANK enough for Gretchen Greer…

Next up is Folkloric.  Now THAT has PANK in it!  Despite the orange, I like this.  It’s happy, a little hippie-ish, and just plain happy.  I think the orange will be enough to keep it from coming to my house, but it DOES have pink and PANK, with a nice, mossy green, and it shouts “Happy Spring!”

Makes me want to find one of those peasant blouses I used to own, but really, I think it would be cute with army green capris and a crisp white shirt with a true pink cardi “preppied” around my shoulders.  Yeah, I could get ready for spring in a heartbeat…

Then we have Blue Lagoon.  Not very exciting, but it makes me want to toss on a navy shirt dress and red flats and head for the shore!

Of course, more ’80s time warp here…  I used to hear as a young teen that I looked like Brooke Shields.  For all my youngster pals, Brooke starred in Blue Lagoon in 1980.  That was also the first year of her Calvin Klein scandal.  You know, back then, people were shocked that a 14 year old girl was saying “You want to know what comes between me and my Calvins?  Nothing.”  Hem.

Wrapping up the new Spring 2011 colors is Lemon Parfait.  While I think Vera’s designers did a great job, it definitely won’t come home with me, because of that yellow.  Still, it’s happy, and I do like the other colors in the print – grey, mocha, lime and “sea foam”.  (Those are Vera’s names for ’em.)  Still, I do appreciate it and think it rounds out the spring collection nicely.

While I have grey on the mind, let’s talk boots.  Have you gotten caught up in the boot trend this season?  I have a closet full of boots, but I want a grey pair, and I’ve discovered that my legs aren’t tall boot friendly.  I already knew I was short between the ankle and knee, and thanks to one rude male nurse some 14-15 years ago, I know I have “really big calves” for a woman my size.  Hem.  I found a cute pair last night, but they had a strange, narrow, low wedge heel that didn’t feel very stable at all.  Maybe I’m meant to just make do with all the boots in my closet?

Last, but hardly least, I’m now smitten with this rug, no thanks to those darling Bon Bon Rose Girls.

That’s from Grandin Road, which is very new to me.  I haven’t decided whether to thank the BBR girls or not yet.  Our great room is making the transition from English Cottage to a more modern feel, and there’s something on virtually every page that would look great in the Woods!  Do you have an online resource for home or fashion I should know about?  It’s also time to fret about a gala frock already.  Never mind that I don’t know what I’m going to wear tomorrow night for the postponed holiday party that is now a mid-winter’s bash…

I can’t even find a photo to suggest what I want this year.  I’m thinking floor length, elegant and simple, without being boring.  No black, and I’m not sure I want red either, because it’s the Saturday after Valentine’s Day and I bet a lot of ladies are going to wear red.  HELP!!