Happy Dogs on Thursday, little friday and Thankful Thursday.  Gretchen introduced FETCH a Cure on their blog already, so I’ll just share the items that caught my attention in the email that alerted us to the existence of such.

Sadly, Gg’s guilt trip isn’t going to work; we won’t be going tomorrow night, but I am going to explore and get to know the organization better and see if it is something we’d like to be affiliated with.  However, the art below is ALMOST enough to tempt me to change my mind…

Those caught my eye in a Virginia Living email yesterday and led me to click over and learn a bit about FETCH and their upcoming pet parade and auction.  I’d love to have any of those pieces of art, but I am especially torn between the bottom two… not that it matters since I’m not attending and there’s no online or proxy bid options that I can find.  Booo!

Are there any cool pet charitable events in your community?  I’ve seen a doghouse auction on another blog, and I have a local friend who hosts a pet food drive holiday party with her mom every year, but I’m curious…

See…  We are pondering starting a canine – or pet – glaucoma charity.  Mugsy and I were well on our way to starting our own charity to provide support for pets with mobility issues and their owners, but sadly his spinal cord strokes took his life before we got that off the ground, and carrying on without his cheerful, determined spirit was too much for me.  (Why yes, I misted up just typing that.)

Abrupt transition to Thankful Thursday.  I’m thankful that the heatwave has broken, and if not this afternoon, tomorrow for sure, Sissy will get her MUCH NEEDED walk.  I’m thankful that we have had these precious, sweet dogs who have given us far more than they’ve required from us… and yes, our fur-kids tend to be high maintenance, but still, I stand by that statement.  I’m also thankful to be knitting again!

What are you thankful for today? 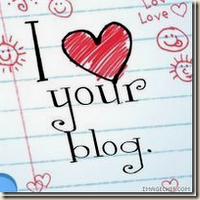 Thank you, Alison.  What an honor!  This whole blogging thing never ceases to amaze me.  I started with great reluctance over a year ago, and I’ve met – and continue to meet – so many warm, wonderful, fascinating people!  I agree with Alison…  I get something from all the blogs I read, whether you’re on the list that will follow or not.  It’s a rather unique community; it’s hard to explain to non-bloggers how it works, but I’m so glad that each and every one of you does blog, and/or stops by to see what I’m blathering about on a given day.

Here are the rules, as passed down from Alison:

Please take accept this award from me and …
1. Please put the logo on your blog.
2. Link the person from whom you received your award .
3. Nominate at least 7 other blogs.
4. Put the links of those blogs on to your blog.
5. Leave a message on their blogs to tell them!

So, now that for the THIRD flippin’ day in a row, Mugsy (the two-legged dog) has run away from home…  I’ve kinda’ lost where I was going with this post.  Please, any and all of you… consider yourselves nominated and keep the award moving.

And no, I am *NOT* exaggerating.  The Knight caught Houdini (as he was calling Mugsy last night) over near our metal shed (the one in the rear of the house) yesterday afternoon, after leaving him alone just long enough to prepare Sissy’s food.  Sissy was in the pen at the time, so that made sense; he wanted to be near her.  So, this afternoon, I kept him inside while Sissy had a hearty run (courtesy of her invisible fence), and then put him in the front yard for a requested potty break.  Ha.  The joke was on me.  Just moments later, the Knight pulled in the drive, and I asked him why he’d not scooped the prince up on his way in.  “Ummm… because he wasn’t there?” was the answer.

The Knight likes to joke.  I rolled my eyes, and asked him to bring Mugsy in before he crawled off again, to which the Knight replied, “Too late,” and headed from room to room along the back of the house, looking out windows.  Sure enough, from the kitchen window, he caught the “got to keep on movin'” dog on the go, around the back of the pen.  He quickly went to fetch Mugsy, who responded with a glare and then turned his head away from the Knight’s chest (where he was being held like a baby).

It was the theme song of my high school track team, and it seems to fit Mugsy’s current attitude too, which brings us to the last little thing I want to share with you.  Mugsy now has his own blog.  There will be updates here, but for those of you interested in the details, you can follow along over there.  Monica and Anita have made said site possible, and I truly appreciate all of the support many of you have offered.

Oh – and the prince has suddenly gotten VERY mouthy again, after over a year of near silence.  It finds me shaking my head, and smiling.  The ol’ boy still has lots of spunk and wants us to note it!